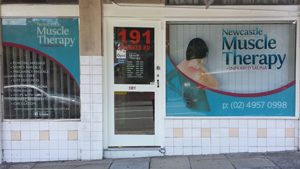 Newcastle Muscle Therapy has been operating since 2004. We offer a relaxing atmosphere. Our main type of massages we do are Sports Massage, Remedial Massage, Pregnancy Massage.

If your new to the practice please arrive 5mins early to fill out a client file. 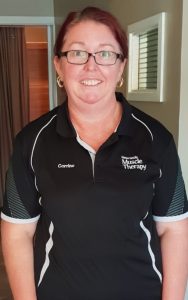 Corrine has been working in the industry for 15 years. She obtained her Certificate 4 in 2002, then finished off her Diploma in 2006.

She has worked at a Physiotherapy Practice where she gain a lot of knowledge from the other therapists.

In 2005 Corrine joined the team at Newcastle Muscle Therapy and in 2009 she became the new owner of the business.

Corrine has been involved in Soccer and looked after South Cardiff for 10 years in the NBN State League. Has also worked with teams in Sydney & Newcastle in the NRL,  NRL Rep teams & Union teams in Sydney. Has treated cast & crew from Cirque du Soleil and Disney On Ice.

Has worked at the  Commonwealth games Gold Coast 2018, looking after the Netball teams.

Since 2010 Corrine has been diagnosed with a condition called Ankylosing Spondylitis. This is a condition that falls into the “Arthritis”. It effects the Spine, Pelvis and joints of the body. If you have this condition or similar condition Corrine is happy to be able to treat you. 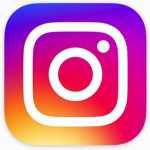